It’s been a while, but the 10/10 (or tenoutoften) feature is back!  In it,  I write about 10 hot and fresh songs in no particular order, for your kind consideration and attention.

I continue to write individual blog posts about certain songs.  That does not mean that songs in the 10/10 lists are any less than those featured individually.

Writing 10/10 features means I can cover more songs in one shot.  So you get to learn about more new music that I hear but don’t always get a chance to write about. 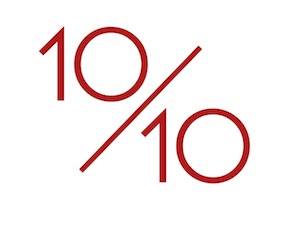 Fans of the Cyndi Lauper classic may be certainly taken aback by how Canadian trio Nikki’s Wives interprets “Girls Just Want To Have Fun”, but don’t be worried, it’s a slowed-down version that will snuggle up to you.  I was fortunate to see the band perform it live back in the Spring, and the audience ate it up.  Nikki’s Wives taps into the lyrics of the song, wrestles emotion from the gleeful setting, and gives the song a completely different point of view.

Swedish producer Hellberg is back with his best release since last Fall’s “Headlights” (with Leona Lewis).  His way to craft a seamless melody jibes so well with the graceful, invested vocal Aloe Blacc provides in “Punching In The Dark”.  Aloe has been popping up everywhere lately, from singing on fine songs from Avicii’s “SOS” to Mathieu Koss’ “Never Growing Up” to Lost Frequencies’ “Truth Never Lies”.  “Punching In The Dark” is anthemic without being overpowering, and you’ll find it stuck in your head more often than not.

Martin and Tristan started off 2019 with a big bang after signing to Astralwerks, home of Halsey and Illenium, and watching their first single “Starry Eyes” become a club and dance radio hit.  The Vancouver producers followed it up with two singles already, the more recent “Loyal”, an emotional electro-ballad, as well as the tropical-tinged “Don’t Let Them”.  They’re both solid, but “Don’t Let Them” has an edge for me with its celebratory vibe amid encouraging lyrics making you think twice about letting people walk all over you and to take a stand instead.  It’s guaranteed to make you bounce and feel so good!

Philly bred, L.A.-based Bruce Wiegner is a new name to get to know as a singer/songwriter/producer with his third solo single “Malicious”.  The song is a sophisticated, melodic electro-pop delight, playfully calling out a former lover amid vibrant synths and percussion.  Backed with a killer funky groove, “Malicious” may very well cause a spontaneous singalong, so don’t say you weren’t warned.

Although his name doesn’t appear on the artwork, I need to point out right away that MAX is the vocalist on “Bite My Tongue” by his fun side project with his very talented buddy Ryan Siegel, Party Pupils.  Fans have seen Ryan supporting MAX in his solo shows where they often add a few Party Pupils performances that truly energize the crowd.  “Bite My Tongue” allows MAX to sink into that comfortable, soulful place where he has ventured successfully on earlier singles like “Wrong” and “Ms Anonymous”, this time set in an appetizing house setting to which dance club DJ’s should direct their attention.

Spanish producer Different Heaven (and pro-gamer aka Alvaro Perea) will brighten up your day with a story about falling in love, and wanting to become “Strangers” again just to feel what it’s like all over again.  “Strangers” is instantly likeable and most of us will identify with it.  Sung with vigor by Roseanna Brown, “Strangers” has a dynamic hook which will sell it home to you if the lyrics and melody somehow don’t grab you.  It’s perfectly suited for dance music radio play anywhere.

Alex Mali is a relatively new R&B/pop singer from Brooklyn whose music has quickly been getting traction throughout the US.  That’s not at all surprising, with a voice that is as convincing as Normani and pointed lyrics that recall a less complex H.E.R.  What’s most attractive about Alex’s voice is her sweet tone, which prevails throughout “Start It Up”.  The song is about what you feel you should do when you think you might get hurt before a potential relationship even begins.  This can be frustrating when your heart tells you that someone might be ‘the one’, in the way that past lovers were not, and your head tells you otherwise.  Despite a tough topic, the melody is soothing and the song goes down easy.  It’s from Alex’s new EP Sweet & Sour, and check out the video for “Start It Up” above.

After the smashing #1 dance club hit “Concrete Heart” which they recorded with Vassy, New York City’s Disco Fries (otherwise known as Nick and Danny) are back this time on Spinnin’ with “Family Affair”.  It’s a pumped up house take on the Mary J. Blige classic from 2001 but this time with uncredited male vocals. “Family Affair” is such a recognizable song and one that needs to be covered in the right way.  Disco Fries put it on a pedestal, not taking too many production liberties with it, and make their version shine, and club play reaction will be instantaneous.  I look forward to seeing “Family Affair” follow “Concrete Heart” up the dance charts.

Toronto production duo Flight School (Guillaume and Conor) surprised everyone in Canadian music land earlier this year by scoring a highly rare out of the box Top 20 national radio hit, after winning an iHeart Radio contest, with “Figure It Out”.  The likeable, rough-around-the-edges sound of “Figure It Out” has been succeeded by the more enigmatic deep house of “Come & Go”.  One of the co-writers of the song with Flight School is its singer Laurell, who won a Juno Award as the vocalist of Nick Fiorucci’s “Closer”, and has recorded with other prominent dance producers like Ummet Ozcan, Quintino, and Steve Void.  Her rich and captivating performance should help guarantee “Come & Go” more radio play and garner attention from outside of Canada.  “Come & Go” is international in its accessible dance flavours and sound.  Check out the video above.

“Who’s Gonna Love U” is a stylish slice of deep house from Canadian producer Ryan Shepherd, whose music has been featured in this blog a number of times over the past few years.  Whereas a number of Ryan’s songs have slammed hard and were tailored for clubs and festivals, in his latest for Armada, “Who’s Gonna Love U” should easily find favour on the radio.  Canadian singer/songwriter Heather Janssen’s voice is alternately delicate and alluring, all the while delivering a strong message to a previous lover – “who’s gonna love U if I don’t love U, nobody else could”.  Some spicy remixes could also help “Who’s Gonna Love U” get the green light from club DJ’s too.